CHICAGO, MAY 20, 2017—Wolfgang Puck, Chef/Owner, Wolfgang Puck Fine Dining Group, was named the 2017 Gold Plate Award winner by IFMA. Wolfgang was nominated by Nestlé Professional and was one of eight outstanding operator executives who were eligible for the award this year after being nominated in March for the IFMA Silver Plate award. Wolfgang represented the Independent Restaurants/Multi-Concept Category. 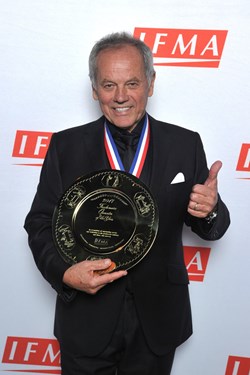 “It is indeed a great pleasure to be here and recognized,” Wolfgang said while accepting his award during the IFMA Gold & Silver Plate Celebration that took place in front of more than 700 foodservice professionals. “I’m so proud, and to me this whole thing is like a dream.”

Wolfgang has changed the way Americans cook and eat by combining classic French techniques with California and Asian influences as well as the freshest and finest ingredients. He has also changed the face of dining in cities throughout the nation, first in Los Angeles, then in Las Vegas, where he was the first star chef to create a contemporary fine dining restaurant, paving the way for other celebrated chefs and the city’s metamorphosis into an acclaimed dining destination.

About the Silver Plate Class of 2017:

In addition to Mr. Puck, the 2017 Silver Plate recipients (and the industry leading companies that nominated them) include:

About the Gold Plate Selection Process:

The Gold Plate Award recipient was determined through secret ballot by a jury of past Silver Plate winners, national trade press editors and foodservice experts. Overseeing the selection process was the chairperson of the International Gold & Silver Plate Society, Julie Stewart, Food Service Director at SAS. The Selection Jury was chaired by Nancy Kruse, The Kruse Company. The ballot was tallied by BDO USA, LLP and kept confidential until the announcement at the Gold & Silver Plate Celebration on May 20.

About Past Gold Plate Winners: