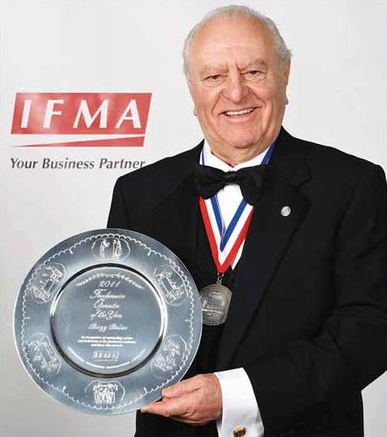 It is with sadness that we announce the passing of C. Peter ‘Buzz’ Beler, founder and co-owner of the Prime Rib and winner of IFMA’s 2011 Silver Plate Award in the Independent Restaurant Operator category.

C. Peter “Buzz” Beler, whose restaurant, the Prime Rib, came to define a certain 1930s sophistication and was known for generous slabs of its namesake dish, signature fried Greenberg potato skins, steak au poivre prepared “bleu,” and precisely chilled bluepoints, passed away Oct. 23 in Charlottesville, Virginia. He was 90. A cause of death was not available, according to family members.

From the beginning, the Prime Rib came to define luxury dining. Buzz succeeded in creating a space where standards are maintained such as waiters in tuxedos who serve well-dressed diners who exude nothing but good behavior for a night out on the town.

“I wanted my restaurant to look like a sleek 1930s movie set,” he told The Baltimore Sun in 1995. “I wanted it to shimmer in black and white, like the old movies I used to catch at the Aurora on North Avenue.”

In 2011, Buzz was honored with an IFMA Silver Plate award in the Independent Restaurant Operator category for his distinguished accomplishments and contributions to foodservice excellence. IFMA, and the entire foodservice community, mourn for Buzz and our thoughts and prayers are with his family and friends during this difficult time.