"For 63 years now, the Gold & Silver Plate awards have been the pinnacle award for individual excellence in our foodservice industry," said IFMA President and CEO, Larry Oberkfell. “The 2017 Silver Plate Class continues this excellent record with winners that demonstrate the best of our industry. All eight set the standard in their respective segments and we honor them as the best of the best.” 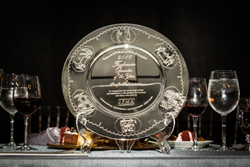 The Gold Plate Award was announced by way of secret ballot at the 63rd Annual Gold & Silver Plate Awards Celebration—on Saturday, May 20, during NRA Show Week at the Revel Fulton Market in Chicago’s West Loop neighborhood.

For more information, go to www.IFMAWorld.com/gsp.